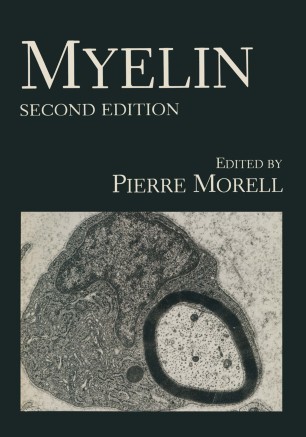 My colleagues and I have been gratified by how rapidly the first edition of Myelin has been aeeepted as a standard referenee work by myelin researehers. This is undoubtedly the primary faetor aecounting for the high rate of reeidivism among the authors with respeet to preparation of a seeond edition; eleven of the original twelve contributors were again involved. Four new authors (Wendy Cammer, Marjorie Lees, Ute Traugott, and Seymour Greenfield) have also eontributed to the present volume. This new edition retains many aspects of the format of the original, even including use of the same chapter headings. Thus, comments in the preface to the first edition concerning the level at which material is presented and the relationships between chapters covering the "basic" and "c1inical" material are still applicable. Despite certain similarities in overall organization, comparison of the present edition with the original demonstrates that our eHorts to restriet expansion in the length of the text were not notably successful; the new edition is mueh lengthier than the original. Nevertheless, the increase in text length is modest relative to the increase in information in the seven years separating the preparation of the two editions. Most of the material in the individual chapters has had to be completely redone in order to include this new information. For example, our view of the metabolism of myelin increasingly must take cognizance of a very rapidly turning over pool of certain of its components.