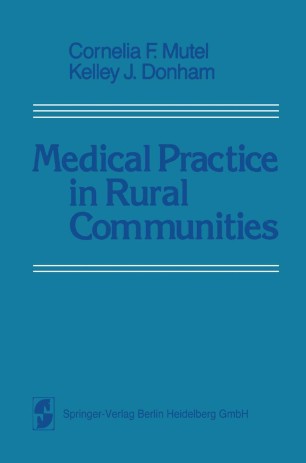 Despite the urbanization of the United States, the rural population exceeds 60 million, and the provision of health services to these people remains a difficult problem. This volume addresses one crucial aspect of that problem-the task of attracting physicians to rural medical practice. It does this by carefully analyzing the special health problems and the general features of rural society in which the young doctor would be working. Rural health needs have been recognized in America for wen over a century. In response, many organized health programs have, in fact, improved the situation. Compared to 1930, the present coverage of rural counties by public health agencies has been greatly extended. Thanks to the Hill-Burton Act of 1946, the availability of general hospital beds has become virtually equalized among the states with varying degrees of rurality. Federally subsidized and locally organized health programs are serving migratory workers, American Indians, the people of Appalachia, and other rural groups. Voluntary health insurance covers millions of rural families, even though the extent of this economic protection is less than among urban families. Medicare helps to protect the rural aged, as it does the urban. Medicaid finances health services for the rural poor far more effectively than the purely local welfare programs of 1930. There is no question, then, about the improvement in rural health resources and services in America over the last 50 years.