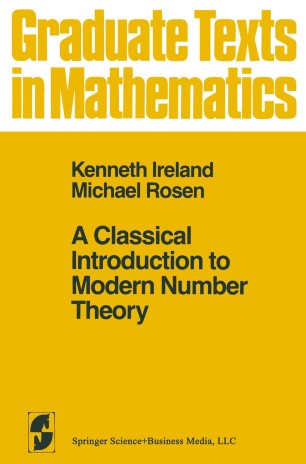 This book is a revised and greatly expanded version of our book Elements of Number Theory published in 1972. As with the first book the primary audience we envisage consists of upper level undergraduate mathematics majors and graduate students. We have assumed some familiarity with the material in a standard undergraduate course in abstract algebra. A large portion of Chapters 1-11 can be read even without such background with the aid of a small amount of supplementary reading. The later chapters assume some knowledge of Galois theory, and in Chapters 16 and 18 an acquaintance with the theory of complex variables is necessary. Number theory is an ancient subject and its content is vast. Any intro­ ductory book must, of necessity, make a very limited selection from the fascinat ing array of possible topics. Our focus is on topics which point in the direction of algebraic number theory and arithmetic algebraic geometry. By a careful selection of subject matter we have found it possible to exposit some rather advanced material without requiring very much in the way oftechnical background. Most of this material is classical in the sense that is was dis­ covered during the nineteenth century and earlier, but it is also modern because it is intimately related to important research going on at the present time.