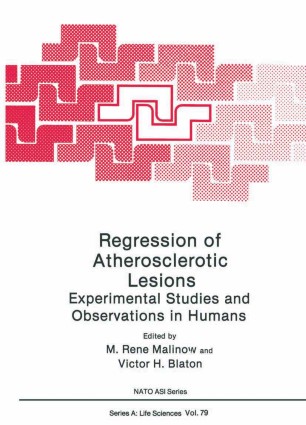 Experimental Studies and Observations in Humans

The Advanced Study Institute on Regression of Atherosclerotic Lesions, sponsored by the North Atlantic Treaty Organization, was held in Maratea, Italy, September 11-13, 1983. The institute was designed to foster discussion of experimental data on the regression of atherosclerosis in animals and evidence of a similar phenomenon in humans. The participating scientists showed with anatomical and biochemical data, that atherosclerosis regresses in cholesterol fed animals after withdrawal of atherogenic stimuli. The existence of regression in humans was inferred from sequential angiographic visualization of arteries, but anatomical and biochemical characteristics of the process have not been defined. Two mechanisms are probably involved in such an angiographic regression. The first, which may occur when hyperlipidemia is partly or fully corrected or during undernutrition or other metabolic abnormalities, may be related to atherosclerosis changes noted in animals undergoing regression. The second type seems independent of changes in plasma lipid levels and may involve resolution of thrombi or other underlying arterial wall factors. The relative frequencies of the two mechanisms are unknown; whether they can occur simultaneously also warrants consideration. It is likely that an exciting milestone will be forthcoming when regression of atherosclerosis is unequivocally demonstrated in humans. Publication of these institute proceedings constitutes a valuable background for future developments.