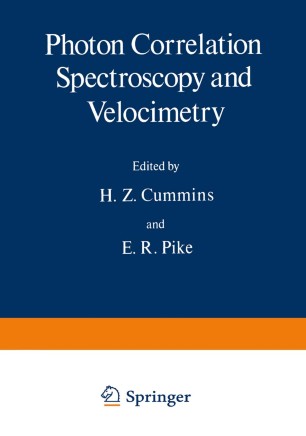 Following the first Capri School on Photon Correlation Spectroscopy held in July 1973 and published earlier in this series (Series B: Physics v.3) a second Capri NATO Advanced Study Institute on this topic was held at the Hotei Luna from 26 July to 6 August 1976. This volume contains the invited lecture courses and seminars and some of the contributed seminars presented at this Institute. Much had happened in the field in the intervening three years and it was the intention of the Organising Committee to build on the previous courses • without detailed repetition of fundamentals. and to extend the coverage widely over the use of photon-correla­ tion methods for the temporal or spectral analysis of fluctuating light sources. In particular, the rapid expansion of these methods for the measurement of macroscopic motion by Laser Doppler Veloci­ metry was given special emphasis as is indicated in the title. The members of the Organizing Committee were: E R Pike, RSRE, Malvern, UK } _ Co-directors H Z Cummins, CCNY, New York, USA M Bertolotti, University of Rome, Italy - Local Organiser P Pusey, RSRE, Malvern, UK - Treasurer V DeGiorgio, CISE, Milan, Italy P Lallemand, ENS, Paris, France Pierre de Gennes assisted the Committee during the planning of the Institute but was unfortunately prevented at the last minute from attending.