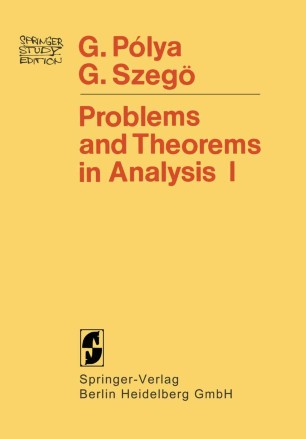 Problems and Theorems in Analysis

The present English edition is not a mere translation of the German original. Many new problems have been added and there are also other changes, mostly minor. Yet all the alterations amount to less than ten percent of the text. We intended to keep intact the general plan and the original flavor of the work. Thus we have not introduced any essentially new subject matter, although the mathematical fashion has greatly changed since 1924. We have restricted ourselves to supplementing the topics originally chosen. Some of our problems first published in this work have given rise to extensive research. To include all such developments would have changed the character of the work, and even an incomplete account, which would be unsatisfactory in itself, would have cost too much labor and taken up too much space. We have to thank many readers who, since the publication of this work almost fifty years ago, communicated to us various remarks on it, some of which have been incorporated into this edition. We have not listed their names; we have forgotten the origin of some contributions, and an incomplete list would have been even less desirable than no list. The first volume has been translated by Mrs. Dorothee Aeppli, the second volume by Professor Claude Billigheimer. We wish to express our warmest thanks to both for the unselfish devotion and scrupulous conscientiousness with which they attacked their far from easy task.