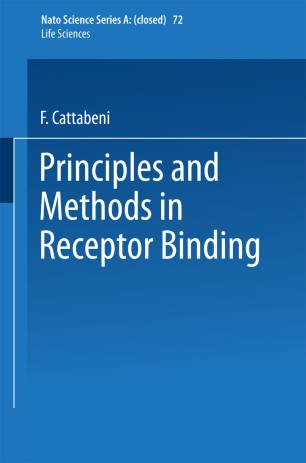 Principles and Methods in Receptor Binding

One of the major advances in the understanding of the mechanism of action of hormones, neurotransmitters and drugs had arisen from the hypothesis that the physiological or pharmacological responses are trig­ gered by their interaction with specific cell compo­ nents, termed receptors. However, the presence of receptors has been inferred from indirect data, and only recently has it been possible to study the kinetics of the interaction between drug and receptors directly, through the so called "binding technique. " This NATO-ASI on "Principles and Methods in Receptor Binding" was devoted mainly to the following aspects of the study of receptors: the principles underlying the use of the binding technique; the mathematical models necessary to interpret binding data; the application of binding methods to specific receptors; and, finally, a few selected examples of coupling between receptors and physiological re­ sponses. In the chapters of this book, special interest is devoted to the analysis of the simplest models for the interaction of receptors with their ligands (either hormones or neurotransmitters or drugs). The graphical techniques used to analyze the data from binding exper iments are extensively discussed, together with the statistics that have to be used in binding analysis. Moreover, the basic concepts to analyze binding data using a personal computer are presented. v vi PREFACE The factors which should be considered when setting up a binding assay (such as choice of ligand and incubation conditions, preparation of tissue, termina­ tion of incubation) are discussed.