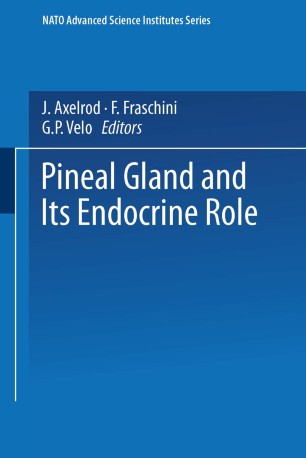 The Pineal Gland and its Endocrine Role

The pineal gland has been a subject of interest and speculation for more than 2000 years. Greek anatomists were impressed by the ob­ servation that the pineal gland is an unpaired structure and they believed that it regulated the flow of thoughts. The philosopher Descartes proposed an important role for this organ in brain function. At the beginning of the 20th century experiments by several investi­ gators indicated that the pineal influenced sexual function and skin pigmentation and was also responsive to light signals. With the iso­ lation of melatonin from bovine pineal glands by Lerner and cowork­ ers in 1958 the modern era of pineal research was initiated. Within a few years the pathway for the biosynthesis of melatonin in the pineal was elucidated. Soon thereafter it was shown that the formation of melatonin was influenced by environmental lighting. Ana­ tomists found that the pineal was innervated by sympathetic nerves and that the gland had photoreceptor elements. It was also shown that the gonads were influenced by light via the pineal gland. Research on the pineal gland became of increasing interest to anatomists, bioche­ mists, pharmacologists and endocrinologists. With the expanding know­ ledge concerning the function of the pineal gland contributed by the wide variety of disciplines, it was thought that a study workshop would be timely.