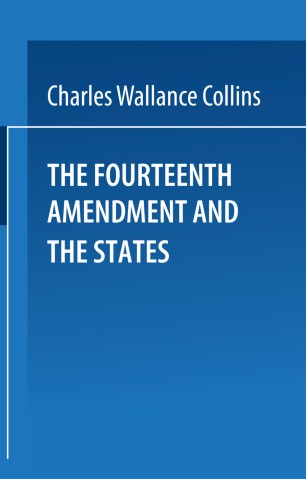 The Fourteenth Amendment and the States

THE studies here presented are the outgrowth of a paper read before the Government Club of Harvard University in February, 1911. Some of them have within recent months appeared, in substantially their present form, in certain of the academic and legal journals. In the preparation of the statistical material the author has made no use of the current digests of deci­ sions, annotations to the Constitution, nor of the indices to the Supreme Court Reports, except by way of com­ parison of results. He has gone directly to the body of the Reports and given each case a personal examination. Much repetition will be found throughout the work. This may detract from its logical unity, but it is hoped that it may serve some purpose. The true nature of the Fourteenth Amendment to the Constitution of the United States is little known. The processes of its operation are intricate and complex. This reiteration, therefore, of certain salient features may not be amiss in serving to render more familiar a subject that, al­ though not new historically, has been scantily discussed. The author's thanks are due to the editors of the following periodicals for the courtesy of extending to him the copyright privileges for the use of the material vii VUl PREFACE in the chapters mentioned below: The American Law Review for Chapters V and VI; the Yale Law Journal for Chapter VII; the Columbia Law Review for Chapter VIII; and the South Atlantic Quarterly for Chapter X.