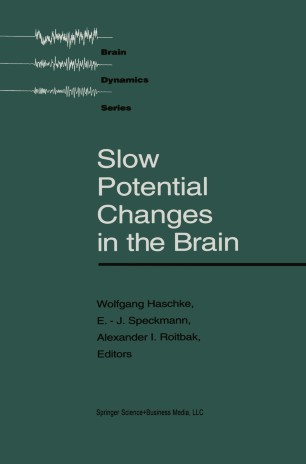 Slow Potential Changes in the Brain

DC-potential changes, comprising fast fluctuations and slow shifts, rep­ resent objective concomitants of neuronal processes in the brain. They can be recorded not only in animals, but also in humans under various conditions. As far as slow brain potentials are concerned, exciting results have been detected with respect to their correlation to psychophysiolog­ ical events. Although a large amount of data has been accumulated by psychophysiologists, neurophysiologists, and other scientists involved, the neurophysiological basis of these field potentials is still not clear, and remains controversial. Scientists from European countries participated in an interdisciplinary symposium in the summer of 1990, July 2 to 6, at the Friedrich Schiller University in Jena, which covered the field of slow brain potentials from the psychophysiological to the cellular level, including glial cells and microenvironment. From this conference the idea derived to present an up-to-date overview on important aspects of the field concerned. The Introductory Remarks are given to elucidate what is thought to be a "generator" of slow potentials of the brain. The large number of sources, implications of the "inverse problem" to analyze field potentials are taken into account.