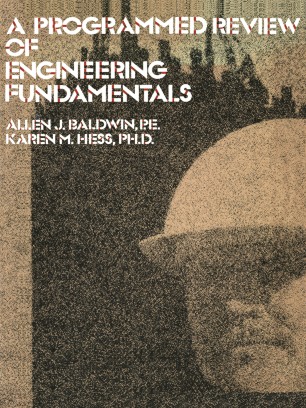 A Programmed Review Of Engineering Fundamentals

Engineering registration is accelerating at a pace unequalled since institution of registration laws in the 1920s and 1930s. This phenomenon is not due to an easing of entrance require­ ments, since only vestiges of "grand fathering" and eminence exist in most states. Nor is it due to a lessening in the difficulty of the registration examinations. In fact, it is generally agreed that the Engineering Fundamentals Examination has significantly increased in difficulty over the last fifteen years. Why then the increased interest in registration among practicing engineers? Historically the professional engineer has been in private practice offering consulting services directly to the public. Registration laws were passed to protect the public from incompetent, untrained practioners in any engineering area. However, the registration laws go beyond estab­ lishing an individual's credentials. One reason for the new interest in engineering registration is the proliferation of new activity areas such as pollution control and energy conservation where the public is keenly aware of and insistent upon quality technological inputs.