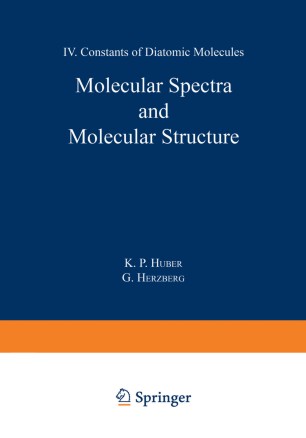 Since the publication in 1950 of Vol. I, Spectra of Diatomic Molecules of Molecular Spectra and Molecular Structure, much progress has been made in the field. While there have been some important refinements in the theory of diatomic molecular spectra, most of the advances have been in the further exploration of individual spectra. Not only has the number of molecules about which some spectroscopic data are available been increased by a factor of 2 to 3, but also the spectroscopic information about the molecules known in 1950 has been vastly extended. This is due to the observation of new elec­ tronic states (about three times as many as known before), the enormous improvements in the accuracy of the constants of the states known in 1950, and the determination of higher order constants. In view of the increasing use of spectroscopic information on diatomic molecules in other fields of physics, in chemistry, and in astrophysics, it appeared desirable to prepare an up-to-date version of the table of molecular constants in the appendix of Vol. I. This updating proved to be far more time-consuming than originally anticipated, and it is only now, 10 years that we are able to present such a table, which, instead after its initiation, of the original 80 pages (plus 30 pages of bibliography), now fills a volume of 700 pages. In the interest of economy, and unlike the original version, the new table has been produced by photo-offset from the final manuscript.