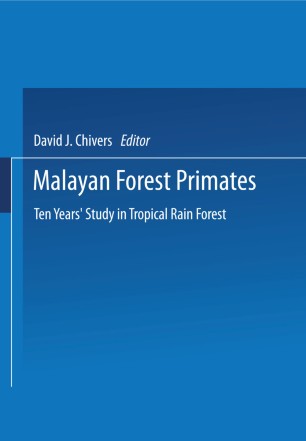 The prirnates that provide the central theme of these studies by David Chivers and his colleagues are the dominant large herbi­ vores of the tropical evergreen rain forest. Tothis extent, they are the ecological counterparts of the great herds of ungulates in­ habiting the savannahs of tropical Africa (and the monsoonal plains of Asia in their pristine state). Both groups comprise the chief primary consumers of living vegetable tissue in their respective environments. Members of each show appropriate anatomical adapt­ ations for such a diet. As efficient exploiters of a dispersed but generally abundant food source, each group collectively forms the main vertebrate component of animal biernass in the environment. Yet, despite superficial convergence, there are important differences in the biology and behaviour of members of these two groups of herbivores. Of greatest practical moment to the enquiring biologist are the ready visibility of most plains-dwelling ungulates, the ease with which the researcher can travel over (or above) their habitat by motor transport (or light aircraft) and the facility for near approach without causing disturbance that a closed vehicle has proved to offer. Given the additional attractions of wide, open views and stupendaus scenery, generally invigorating climate and easy life-style, it is perhaps not surprising that in past decades much research effort has focussed on the larger herbivorous mammals of the tropical savannahs.