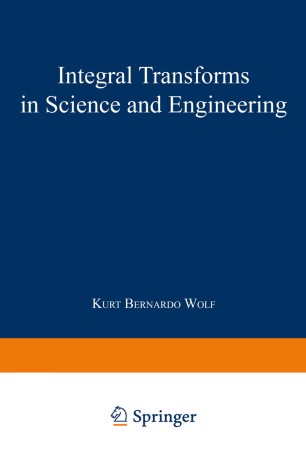 Integral Transforms in Science and Engineering

Part of the Mathematical Concepts and Methods in Science and Engineering book series (MCSENG, volume 11)

Integral transforms are among the main mathematical methods for the solution of equations describing physical systems, because, quite generally, the coupling between the elements which constitute such a system-these can be the mass points in a finite spring lattice or the continuum of a diffusive or elastic medium-prevents a straightforward "single-particle" solution. By describing the same system in an appropriate reference frame, one can often bring about a mathematical uncoupling of the equations in such a way that the solution becomes that of noninteracting constituents. The "tilt" in the reference frame is a finite or integral transform, according to whether the system has a finite or infinite number of elements. The types of coupling which yield to the integral transform method include diffusive and elastic interactions in "classical" systems as well as the more common quantum-mechanical potentials. The purpose of this volume is to present an orderly exposition of the theory and some of the applications of the finite and integral transforms associated with the names of Fourier, Bessel, Laplace, Hankel, Gauss, Bargmann, and several others in the same vein. The volume is divided into four parts dealing, respectively, with finite, series, integral, and canonical transforms. They are intended to serve as independent units. The reader is assumed to have greater mathematical sophistication in the later parts, though.