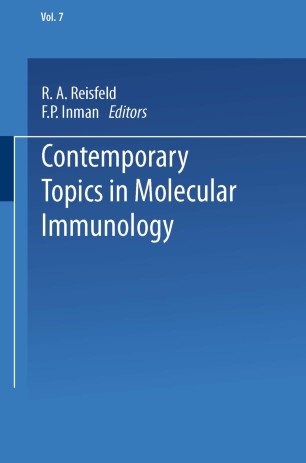 New information is developing so rapidly in the entire field of immunology that one is unable to remain abreast of all advancing fronts. In many cases, consider­ able information has accumulated as the result of the efforts of many investigators, but the conclusions from the various laboratories have not been summarized recently in a comprehensible manner. One such situation has to do with work on IgD. An up-to-date report on this immunoglobulin was included in Volume 10f this series, but since that time there has been considerable progress in the deter­ mination of its structure and function. In the present volume Leslie and Martin have reviewed the accomplishments of recent years and the problems remaining to be solved. New information regarding the concentration of IgD in body fluids in normal and disease states is presented. Studies of the ontogeny of surface IgD in animals are described, and the fmdings imply that it may be important in the primary immune response. The role of IgD on lymphocyte surfaces is thoroughly discussed especially in terms of stimulating or suppressive combinations of signals delivered to the lymphocyte by agents which bind or alter the surface rt:ceptors. The authors conclude by proposing a model for plasma-cell differentiation which accounts fo~ the existence of triple Ig-bearing cells, many IgM-IgD-bearing cells, and the low percentage of cells bearing a single isotype. Sometimes the serum of an individual contains abnormally large amounts of two distinct, homogeneous populations of immunoglobulins.