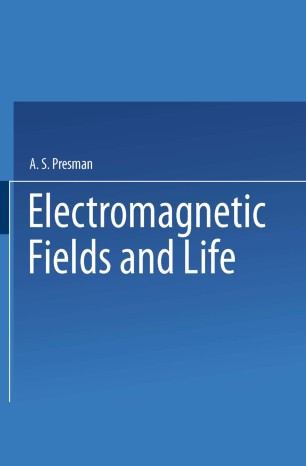 A broad region of the electromagnetic spectrum long assumed to have no influence on living systems under natural conditions has been critically re-examinjld over the past decade. This spectral region extends from the superhigh radio frequencies, through de­ creasing frequencies, to and including essentially static electric and magnetic fields. The author of this monograph, A. S. Presman, has reviewed not only the extensive Russian literatur!;"l, but also al­ most equally comprehensively the non-Russian literature, dealing with biological influences of these fields. Treated also is literature shedding some light on possible theoretical foundations for these phenomena. A substantial, rapidly increaSing number of studies in many laboratories and countries has now clearly established bio­ logical influences which are independent of the theoretically pre­ dictable, simple thermal effects. Indeed many of the effects are produced by field strengths very close to those within the natural environment. The author has, even more importantly, set forth a novel, imaginative general hypothesis in which it is postulated that such electromagnetic fields normally serve as conveyors of information from the environment to the organism, within the organism, and among organisms. He postulates that in the course of evolution or­ ganisms have come to employ these fields in conjunction with the well-known sensory, nervous, and endocrine systems in effecting coordination and integration.