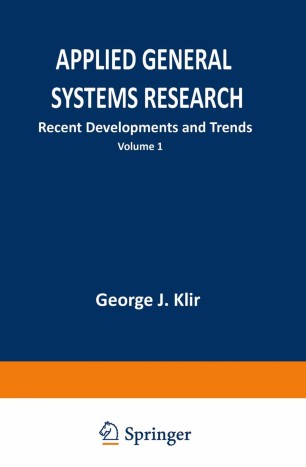 This volume consists of a selection of papers presented at the International Conference on Applied General Systems Research: Recent Developments and Trends which was held on the campus of the State University of New York at Binghamton in August 15-19, 1977, under the sponsorship of the Special Panel on Systems Science of the NATO Scientific Affairs Division. General systems research is a fairly new field which has been developing in the course of the last two or three decades. In my op~n10n, it can be best described as a movement which involves the study of all structural and context independent aspects of problem solving. As such, it is cross-disciplinary in nature and, in this sense, it might seem similar to mathematics. There is a consid­ erable difference, however, between the two. While pure mathe­ matics is basically oriented to the development of various axiomatic theories, regardless of whether or not they have any real world meaning, applied mathematics explores the applicability of some of these theories as potentially useful methodological tools in various problem areas. General systems research, in contrast with applied mathematics, is problem oriented rather than tool oriented. As such, it tries to develop genuine methods for solving systems problems, i. e. , structural type and context in­ dependent problems. The term "genuine method" is used here to refer to a method which adjusts to the problem rather than re­ quiring that the problem be adjusted to make the method applicable.