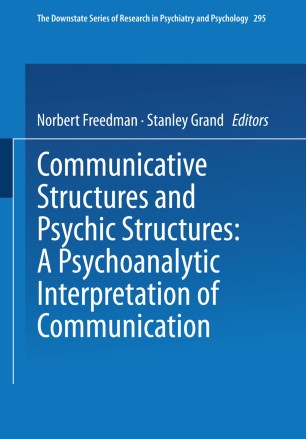 A Psychoanalytic Interpretation of Communication

Part of the The Downstate Series of Research in Psychiatry and Psychology book series (DSRPP, volume 1)

The publication of this volune represents the first in a planned series of special publications on topics of major interest to workers in the fields of psychiatry and psychology. The series will be en­ titled The Downstate Series of Research in Psychiatry and Psychology and is the outcome of a series of discussions among several senior members of the Department of Psychiatry held about four years ago. Included in this group, were Drs. Benjamin Kissin, Henri Begleiter, Leonard Rosenblum, Herbert Pardes, Norbert Freedman, and myself. The talks were initiated by Dr. Pardes, now Chairman of the Department of Psychiatry at the University of Colorado, and the resultant decision was t6 hold three day symposia, hopefully of such excellence that the published papers of each symposium would represent a significant con­ tribution to some particular aspect of human psychology. This deci­ sion necessitated the choice of suitable topics and distinguished speakers who would present original work coordinated into an inte­ grated framework based upon a selected topic.