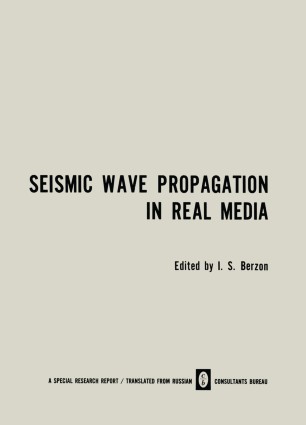 Until recently, the interpretation of data obtained in seismic exploration has been based on comparatively simple representations of the Earth. The most commonly used representation for the Earthhas been a set of thick layers, each characterized by a single value for the propa­ gation speed of seismic waves. During the last several years, more complicated representa­ tions in the form of thin layers with vertical velocity gradients, as weIl as homogeneous thin layers have been considered. New methods for studying propagation speeds in a medium, particularly ultrasonic logging methods, and the results of theoretical and experimental studies of the dynamic characteristics of seismic waves have revealed that areal Earth is considerably more complicated than the simple models accepted in the past. This has led to a need for more realistic representations of the real Earth as a medium through wh ich seismic waves propagate. Because of this, tlie Department of Seismic Exploration Methods of the Institute of Physics of the Earth of the Acad­ emy of Sciences of the USSR has been carrying out both experimental and theoretical studies on the topic "Selection of Physical Representations of Actual Media and the Study of the Correspond­ ing Wave Propagation Effects. " Three major subdivisions have been recognized within this over­ all pro gram: 1. The establishment of a direct relationship between the structure of a real medium and the basic wave-propagation characteristics.