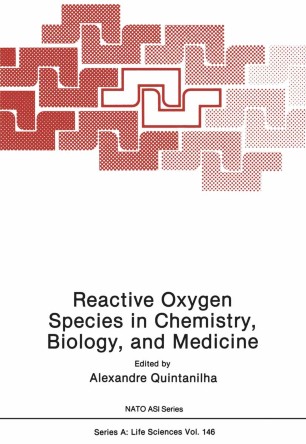 A NATO Advanced Study Institute on "Oxygen Radicals in Biological Systems: Recent Progress and New Methods of Study" was held in Braga, Portugal between Sep­ tember 1 and September 14, 1985, in order to consider the basic chemistry and biochem­ istry of activated oxygen (both radical and non-radical species) and their effect in biolog­ ical systems. This book summarizes the main lectures given at this meeting. While there is no attempt to cover all the major topics in the expanding subject of oxidative mechanisms in biology, an effort has been made to provide overviews on some key aspects of this field. The authors have attempted to convey a clear picture of both what is known and what remains unclear in their respective subjects. Not only are some of the techniques used for detecting activated oxygen species described, but also their strengths and limi­ tations. The chemistry of many of these species is discussed and the biological and/or pathological implications are carefully reviewed. The medical and therapeutic aspects of some of the well established pathways of damage and protection are analyzed. It is our hope that the material included in this book might be useful for both researchers and teachers at the graduate level. The success of this meeting was to a large extent due to the tireless committment of Professor Alberto Amaral and Dr. Concei~a:o Rangel; without their outstanding efforts in dealing with all the aspects of the organization, this summer school would not have been possible.