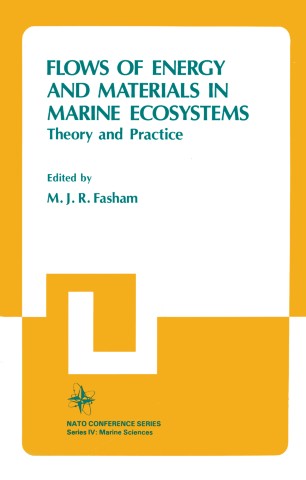 Flows of Energy and Materials in Marine Ecosystems

The impetus for the conference held at Bombannes, France in May, 1982 arose out of a Scientific Committee on Oceanic Research (SCOR) Working Group on "Mathematical Models in Biological Oceanography". This group was chaired by K.H. Mann and held two meetings in 1977 and 1979. At both meetings it was felt that, although reductionist modelling of marine ecosystems had achieved some successes, the future progress lay in the development of holistic ecosystem models. The members of the group (K.H. Mann, T. Platt, J.M. Colebrook, D.F. Smith, M.J.R. Fasham, J. Field, G. Radach, R.E. Ulanowicz and F. Wulff) produced a critical review of reductionist and holistic models which was published by the Unesco Press (Platt, Mann and Ulanowicz, 1981). One of the conclusions of this review was that, whether holistic or reductionist models are preferred, it is critically important to increase the scientific effort in the measurement of physiological rates for the computation of ecological fluxes. The Working Group therefore recommended that an international meeting should be organized which would attempt to bring together theoretical ecologists and biological oceanographers to assess the present and future capability for measuring ecological fluxes and incorporating these data into models. An approach was made to the Marine Sciences Panel of the NATO Science Committee who expressed an interest in funding such a meeting. They awarded a planning grant and a planning group was formed consisting of M.J.R. Fasham, M.V. Angel, T. Platt, R.E.