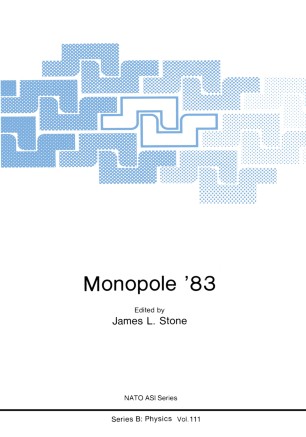 Ten years have passed since It Hooft and Polyakov demonstrat­ ed that superheavy magnetic monopoles were a natural consequence of any Grand Unified Theory (GUT) in which the unifying group contains a U(l) factor as a subgroup. An analysis of these GUTs in an expanding, cooling universe yields a phase transition at an energy ~l015 GeV and at a cosmic time ~lO-35 seconds after the big bang. The general consequences of GUTs and this phase transition are the prediction of proton decay, the production of superheavy magnetic monopoles, and an understanding of the observed excess of matter over anti-matter in the universe. Attempts to provide experimental verification of GUTs has led to valiant experimental efforts in recent years to observe nucleon decay in massive underground detectors. Experiments to search for superheavy monopoles may eventually require similar efforts. Since the unification scale is unreachable in the laboratory, monopole detectors must search for relics of the big bang. Much theoretical groundwork has been accomplished in recent years with the development of GUTs. In Part I of this book, Erick Weinberg gives a theoretical overview of the role of magnetic monopoles in the various unification schemes. Monopoles in the context of the newly revived Kaluza-Klein theories are presented by several authors and are summarized by Qaisar Shafi. Mike Turner begins Part II with a discussion of monopoles in standard big bang cosmology. Paul Steinhardt follows with his perspectives on the inflationary universe; C.