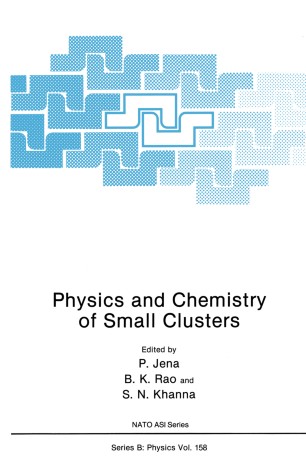 Physics and Chemistry of Small Clusters

Recent advances in experimental techniques now enable researchers to produce in a laboratory clusters of atoms of desired composition from any of the elements of the periodic table. This has created a new area of research into novel materials since clusters cannot be regarded either as a "large" molecule or as a fragment of the bulk. Both experimental and theoretical studies are revealing unusual properties that are not ob­ served in solid state environments. The structures of micro-clusters are found to be significantly distorted from the most symmetric arrangement, some even exhibiting pentagonal symmetry commonly found in icosahedric structures. The unusual stability of certain clusters, now described as "magic number species", shows striking similarities with the nuclear shell structure. The relative stabilities of clusters depend not only on the composition of the clusters but also on their charged states. The studies on spontaneous fragmentation of mUltiply charged clusters, commonly referred to as Coulomb explosion, illustrate the role of electronic bonding mechanisms on stability of clusters. The effect of foreign atoms on geometry and stability of clusters and the interaction of gas atoms with clusters are showing promise for an indepth understanding of chemisorption and catalysis. The magnetic and optical properties are dependent not only on cluster size but also on its geometry. These findings have the potential for aiding industry in the area of micro-electronics and catalysis.