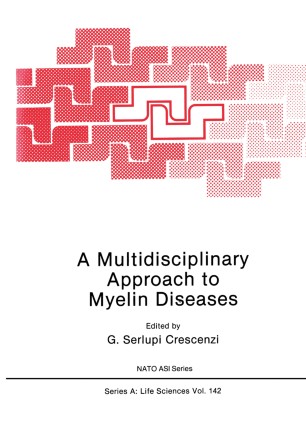 A Multidisciplinary Approach to Myelin Diseases

The present book is based on the papers presented during an inter­ disciplinary meeting which was held in Rome October 27-30, 1986, at the Istituto Superiore di Sanita under the sponsorship of NATO, and with a financial contribution of the Cassa di Risparmio di Roma. The meeting was of great interest because, for the first time, a group of highly qualified scientists specializing in different fields were gathered together to discuss the problem of demyelinating diseases. In thi. context molecular biologists, immunologists, virologists, and lipid chemists could discuss with clinicians for four days every aspect of demyelinating diseases. They shared results of the more recent research with the hope that more knowledge of the myelinating process will eventually succeed in finding new treatments for these diseases. The meeting was successful, perhaps in part because discussions during lunches and dinners provided an opportunity for the exchange of new ideas. This was apparent in the discussions held after the presen­ tation of each paper and was summarized in the very lively round table which was held on the last day. The editor wishes to express his thanks to the scientific committee members: N. Baumann, C. Fieschi, G. Macchi, J.M. Matthieu, K. Suzuki. It was their advice that made the choice of participants and subjects so successful. The organizer also acknowledge the organizing support of NATO in preparing these proceedings. Acknowledgments have to be offered to Dr. S. Salvati, Dr. A.M.