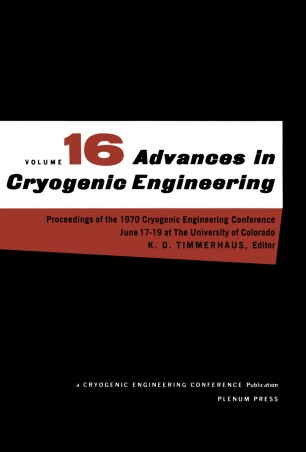 Proceeding of the 1970 Cryogenic Engineering Conference The University of Colorado Boulder, Colorado June 17–17, 1970

1970 marked the seventh return of the Cryogenic Engineering Conference, now affiliated with the National Academy of Sciences through the Division of Engineering, National Research Council, to Boulder, Colorado. Local arrangements for this year's meeting have again been capably handled by the University of Colorado and the Cryogenics Division, NBS Institute for Basic Standards. The Cryogenic Engineering Conference Committee gratefully acknowledges the assistance of these two organizations, and particularly the Bureau of Continuation Education of the University of Colorado, for serving as hosts to the 1970 Cryogenic Engineering Conference. The National Academy of Sciences is a private, honorary organization of more than 700 scientists and engineers elected on the basis of outstanding con­ tributions to knowledge. Established by a Congressional Act of Incorporation signed by Abraham Lincoln on March 3, 1863, and supported by private and public funds, the Academy works to further science and its use for the general welfare by bringing together the most qualified individuals to deal with scientific and tech­ nological problems of broad significance. Under the terms of its Congressional charter, the Academy is also called upon to act as an official-yet independent­ adviser to the Federal Government in any matter of science and technology. This provision accounts for the close ties that have always existed between the Academy and the Government, although the Academy is not a governmental agency and its activities are not limited to those on behalf of the Government.