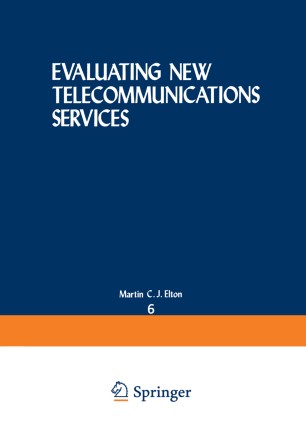 This book contains the proceedings of the first international symposium devoted to research on the evaluation and planning of new person-to-person telecommunication systems. It was sponsored by NATO's Special Programme Panel on Systems Science and took place, in September 1977, at the University of Bergamo in the north of Italy. Telecommunication systems which provide for communication be­ tween people, rather than computers or other instruments, are of two kinds. There are mass communication systems (broadcast radio and television) and interpersonal systems (for example, the telephone and Telex) which join together individuals or small groups. Here we have included in the interpersonal category certain systems for re­ trieving information from computers, essentially those systems in which the role of the computer 1s primarily to act as a store and to identify that information which best fits a user's request. (This excludes management information systems in which the computer performs important transformation functions. ) Distinctions between interpersonal and mass communication sys­ tems, and between these two and da ta communication systems, are increasingly breaking down for those who provide the services. (In the U. K. broadcasters are piloting information retrieval services and the British Post Office is competing with a more sophisticated sys­ tem which could also be used for the exchange of messages. Elsewhere computer da ta networks are increasingly employed for the exchange of personal messages.