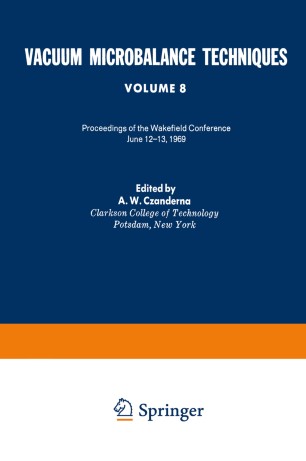 This volume contains the proceedings of the Eighth Conference on Vacuum Microbalance Techniques held at Wakefield, Massachusetts on June 12 and 13, 1969. The tenth anniversary of the first confer­ ence will be registered as this volume passes through the typeset­ ting and proofreading stages. The eight volumes that have spawned from this continuing series of conferences now contain a total of 125 papers. Thus, these volumes serve as a major repository of the world's literature on vacuum microbalance techniques. The Ninth and Tenth Conferences will be held in West Germany in June 1970 and in Texas in 1971. Each of the eight meetings has served as a forum where new developments in this rapidly advancing field can be presented and discussed constructively within a conference atmosphere of cordial informality. The interaction of the participants at the conferences has led to the first treatise on ultra mlcrogravtmetry;' edited by S. P. Wolsky and E. J. Zdanuk, with most of the fourteen chapters written by steady contributors to the volumes on Vacuum Micro­ balance Techniques. The number of research investigations and published works in which a vacuum microbalance is utilized con­ tinues to expandr apldly. f This is a direct result of several types of automatic recording balances that are now available commercial­ ly. 3 The Eighth Conference was held to bring together again re­ search scientists and engineers who exploit the measurement of mass as a means of studying physical and chemical phenomena.