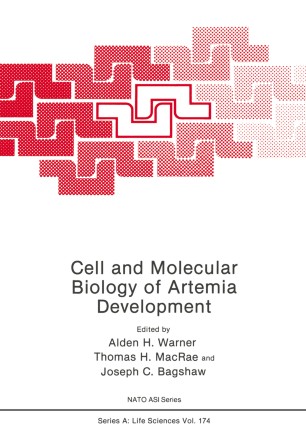 The brine shrimp Artemia has become an important experimental system for studies of the developmental process. In recent years the shrimp has yielded considerable information on the pattern of development, bio­ chemistry, and gene structure and expression of crustaceans. This book is a compilation of research activity from twenty five of the most active re­ search laboratories working with brine shrimp in the above areas. It also represents the proceedings of a NATO Advanced Research Workshop held in Montreal, Canada, August 11-13, 1988. The book contains twenty nine full papers covering the major areas discussed at the workshop. In addition, one page abstracts representing seventeen poster presentations which were given at the workshop, and which were deemed to be most relevant to the theme of the book, are included. These are designated with an [al in the Table of Contents following the title of each paper. A considerable amount of discussion which took place during the workshop has not been included in the book because of space limitations. However, the editors will endeavour to make some of this in­ formation available at a later date through the Artemia Newsletter. In addition to the high percentage of invited speakers who attended and contributed to the workshop, the organizers would like to thank a number of participants who made valuable contributions to the major dis­ cussion sessions. These include: John Freeman, Michael Horst, Herman Slegers, Jack Vaughn, Frank Conte, Sandy McLennan, Clive Trotman and Patrick Sorgeloos.