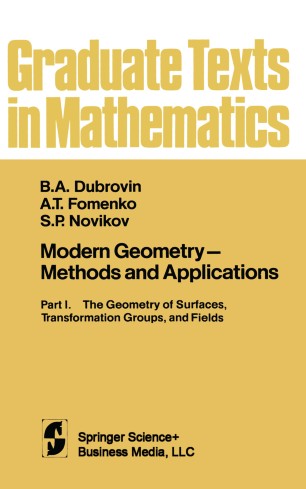 Part I. The Geometry of Surfaces, Transformation Groups, and Fields

manifolds, transformation groups, and Lie algebras, as well as the basic concepts of visual topology. It was also agreed that the course should be given in as simple and concrete a language as possible, and that wherever practic­ able the terminology should be that used by physicists. Thus it was along these lines that the archetypal course was taught. It was given more permanent form as duplicated lecture notes published under the auspices of Moscow State University as: Differential Geometry, Parts I and II, by S. P. Novikov, Division of Mechanics, Moscow State University, 1972. Subsequently various parts of the course were altered, and new topics added. This supplementary material was published (also in duplicated form) as Differential Geometry, Part III, by S. P. Novikov and A. T. Fomenko, Division of Mechanics, Moscow State University, 1974. The present book is the outcome of a reworking, re-ordering, and ex­ tensive elaboration of the above-mentioned lecture notes. It is the authors' view that it will serve as a basic text from which the essentials for a course in modern geometry may be easily extracted. To S. P. Novikov are due the original conception and the overall plan of the book. The work of organizing the material contained in the duplicated lecture notes in accordance with this plan was carried out by B. A. Dubrovin.