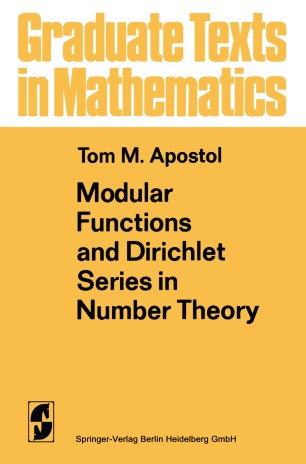 This is the second volume of a 2-volume textbook* which evolved from a course (Mathematics 160) offered at the California Institute of Technology du ring the last 25 years. The second volume presupposes a background in number theory com­ parable to that provided in the first volume, together with a knowledge of the basic concepts of complex analysis. Most of the present volume is devoted to elliptic functions and modular functions with some of their number-theoretic applications. Among the major topics treated are Rademacher's convergent series for the partition function, Lehner's congruences for the Fourier coefficients of the modular functionj( r), and Hecke's theory of entire forms with multiplicative Fourier coefficients. The last chapter gives an account of Bohr's theory of equivalence of general Dirichlet series. Both volumes of this work emphasize classical aspects of a subject wh ich in recent years has undergone a great deal of modern development. It is hoped that these volumes will help the nonspecialist become acquainted with an important and fascinating part of mathematics and, at the same time, will provide some of the background that belongs to the repertory of every specialist in the field. This volume, like the first, is dedicated to the students who have taken this course and have gone on to make notable contributions to number theory and other parts of mathematics. T. M. A. January, 1976 * The first volume is in the Springer-Verlag series Undergraduate Texts in Mathematics under the title Introduction to Analytic Number Theory.