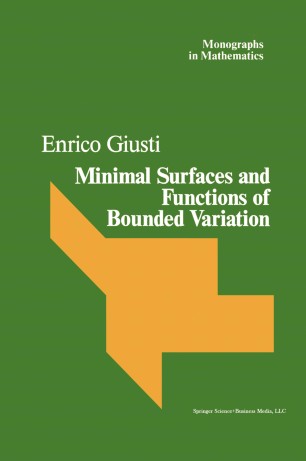 Part of the Monographs in Mathematics book series (MMA, volume 80)

The problem of finding minimal surfaces, i. e. of finding the surface of least area among those bounded by a given curve, was one of the first considered after the foundation of the calculus of variations, and is one which received a satis­ factory solution only in recent years. Called the problem of Plateau, after the blind physicist who did beautiful experiments with soap films and bubbles, it has resisted the efforts of many mathematicians for more than a century. It was only in the thirties that a solution was given to the problem of Plateau in 3-dimensional Euclidean space, with the papers of Douglas [DJ] and Rado [R T1, 2]. The methods of Douglas and Rado were developed and extended in 3-dimensions by several authors, but none of the results was shown to hold even for minimal hypersurfaces in higher dimension, let alone surfaces of higher dimension and codimension. It was not until thirty years later that the problem of Plateau was successfully attacked in its full generality, by several authors using measure-theoretic methods; in particular see De Giorgi [DG1, 2, 4, 5], Reifenberg [RE], Federer and Fleming [FF] and Almgren [AF1, 2]. Federer and Fleming defined a k-dimensional surface in IR" as a k-current, i. e. a continuous linear functional on k-forms. Their method is treated in full detail in the splendid book of Federer [FH 1].