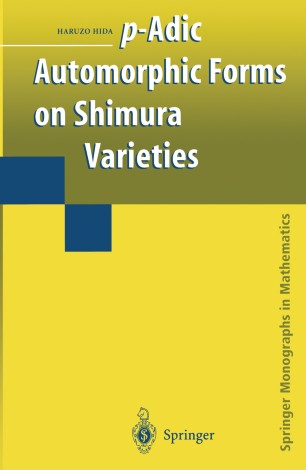 This book covers the following three topics in a manner accessible to graduate students who have an understanding of algebraic number theory and scheme theoretic algebraic geometry:

1. An elementary construction of Shimura varieties as moduli of abelian schemes.

3. A simple proof of irreducibility of the generalized Igusa tower over the Shimura variety.

The book starts with a detailed study of elliptic and Hilbert modular forms and reaches to the forefront of research of Shimura varieties associated with general classical groups. The method of constructing p-adic analytic families and the proof of irreducibility was recently discovered by the author. The area covered in this book is now a focal point of research worldwide with many far-reaching applications that have led to solutions of longstanding problems and conjectures. Specifically, the use of p-adic elliptic and Hilbert modular forms have proven essential in recent breakthroughs in number theory (for example, the proof of Fermat's Last Theorem and the Shimura-Taniyama conjecture by A. Wiles and others).