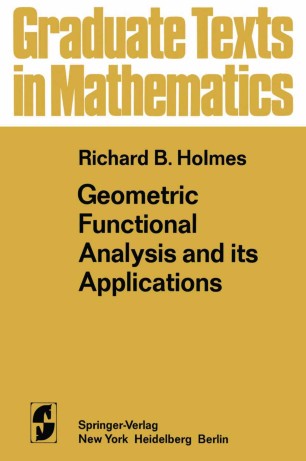 Geometric Functional Analysis and its Applications

This book has evolved from my experience over the past decade in teaching and doing research in functional analysis and certain of its appli­ cations. These applications are to optimization theory in general and to best approximation theory in particular. The geometric nature of the subjects has greatly influenced the approach to functional analysis presented herein, especially its basis on the unifying concept of convexity. Most of the major theorems either concern or depend on properties of convex sets; the others generally pertain to conjugate spaces or compactness properties, both of which topics are important for the proper setting and resolution of optimization problems. In consequence, and in contrast to most other treatments of functional analysis, there is no discussion of spectral theory, and only the most basic and general properties of linear operators are established. Some of the theoretical highlights of the book are the Banach space theorems associated with the names of Dixmier, Krein, James, Smulian, Bishop-Phelps, Brondsted-Rockafellar, and Bessaga-Pelczynski. Prior to these (and others) we establish to two most important principles of geometric functional analysis: the extended Krein-Milman theorem and the Hahn­ Banach principle, the latter appearing in ten different but equivalent formula­ tions (some of which are optimality criteria for convex programs). In addition, a good deal of attention is paid to properties and characterizations of conjugate spaces, especially reflexive spaces.