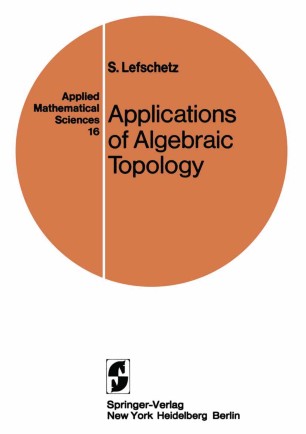 Graphs and Networks The Picard-Lefschetz Theory and Feynman Integrals

This monograph is based, in part, upon lectures given in the Princeton School of Engineering and Applied Science. It presupposes mainly an elementary knowledge of linear algebra and of topology. In topology the limit is dimension two mainly in the latter chapters and questions of topological invariance are carefully avoided. From the technical viewpoint graphs is our only requirement. However, later, questions notably related to Kuratowski's classical theorem have demanded an easily provided treatment of 2-complexes and surfaces. January 1972 Solomon Lefschetz 4 INTRODUCTION The study of electrical networks rests upon preliminary theory of graphs. In the literature this theory has always been dealt with by special ad hoc methods. My purpose here is to show that actually this theory is nothing else than the first chapter of classical algebraic topology and may be very advantageously treated as such by the well known methods of that science. Part I of this volume covers the following ground: The first two chapters present, mainly in outline, the needed basic elements of linear algebra. In this part duality is dealt with somewhat more extensively. In Chapter III the merest elements of general topology are discussed. Graph theory proper is covered in Chapters IV and v, first structurally and then as algebra. Chapter VI discusses the applications to networks. In Chapters VII and VIII the elements of the theory of 2-dimensional complexes and surfaces are presented.