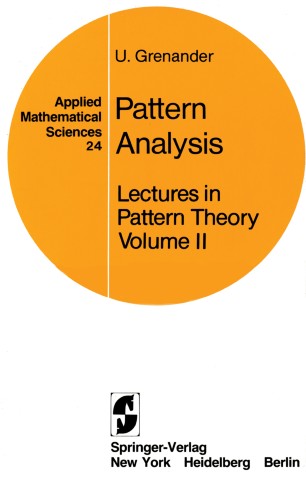 Many persons have helped the author with comments and corrections, and I would like to mention D. E. McClure, I. Frolow, J. Silverstein, D. Town, and especially W. Freiberger for his helpful suggestions and encouragement. The work in Chapters 6 and 7 has been influenced and stimulated by discussions with other members of the Center for Neural Sciences, especially with L. Cooper and H. Kucera. I would like to thank F. John, J. P. LaSalle, L. Sirovich, and G. Whitham for accepting the manuscript for the series Applied Mathematical Sciences published by Springer-Verlag. This research project has been supported by the Division of Mathematical and Computer Sciences of the National Science Foundation and (the work on language abduction, pattern processors, and patterns in program behavior) by the Information Systems Program of the Office of Naval Research. I greatly appreciate the understanding and positive interest shown by John Pasta, Kent Curtiss, Bruce Barnes, Sally Sedelov vi PREFACE and Bob Agins of the Foundation, and by Marvin Denicoff of the Office of Naval Research. I am indebted to Mrs. E. Fonseca for her untiring and careful preparation of the manuscript, to Miss E. Addison for her skillful help with the many diagrams, and to S.V. Spinacci for the final typing. I gratefully acknowledge permission to reproduce figures, as mentioned in the text, from Cambridge University Press and from Hayden Book Company. Also, to Professor J. Carbury for permission to use his illustration on page 704.