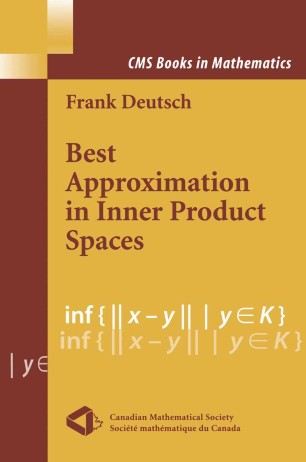 This book evolved from notes originally developed for a graduate course, "Best Approximation in Normed Linear Spaces," that I began giving at Penn State Uni­ versity more than 25 years ago. It soon became evident. that many of the students who wanted to take the course (including engineers, computer scientists, and statis­ ticians, as well as mathematicians) did not have the necessary prerequisites such as a working knowledge of Lp-spaces and some basic functional analysis. (Today such material is typically contained in the first-year graduate course in analysis. ) To accommodate these students, I usually ended up spending nearly half the course on these prerequisites, and the last half was devoted to the "best approximation" part. I did this a few times and determined that it was not satisfactory: Too much time was being spent on the presumed prerequisites. To be able to devote most of the course to "best approximation," I decided to concentrate on the simplest of the normed linear spaces-the inner product spaces-since the theory in inner product spaces can be taught from first principles in much less time, and also since one can give a convincing argument that inner product spaces are the most important of all the normed linear spaces anyway. The success of this approach turned out to be even better than I had originally anticipated: One can develop a fairly complete theory of best approximation in inner product spaces from first principles, and such was my purpose in writing this book.