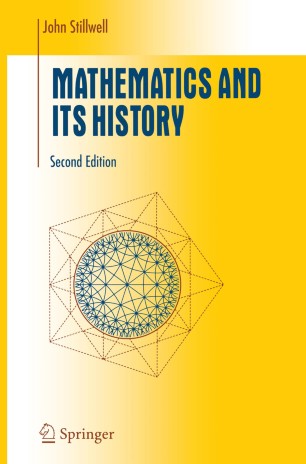 Mathematics and Its History

"There are many books on the history of mathematics in which mathematics is subordinated to history. This is a book in which history is definitely subordinated to mathematics. It can be described as a collection of critical historical essays dealing with a large variety of mathematical disciplines and issues, and intended for a broad audience...we know of no book on mathematics and its history that covers half as much nonstandard material. Even when dealing with standard material, Stillwell manages to dramatize it and to make it worth rethinking. In short, his book is a splendid addition to the genre of works that build royal roads to mathematical culture for the many." (Mathematical Intelligencer)

"The discussion is at a deep enough level that I suspect most trained mathematicians will find much that they do not know, as well as good intuitive explanations of familiar facts. The careful exposition, lightness of touch, and the absence of technicalities should make the book accessible to most senior undergraduates." (American Mathematical Monthly)

"...The book is a treasure, which deserves wide adoption as a text and much consultation by historians and mathematicians alike." (Physis - Revista Internazionale di Storia della Scienza)

"A beautiful little book, certain to be treasured by several generations of mathematics lovers, by students and teachers so enlightened as to think of mathematics not as a forest of technical details but as the beautiful coherent creation of a richly diverse population of extraordinary people...His writing is so luminous as to engage the interest of utter novices, yet so dense with particulars as to stimulate the imagination of professionals." (Book News, Inc.)

This second edition includes new chapters on Chinese and Indian number theory, on hypercomplex numbers, and on algebraic number theory. Many more exercises have been added, as well as commentary to the exercises expalining how they relate to the preceding section, and how they foreshadow later topics. The index has been given added structure to make searching easier, the references have been redone, and hundreds of minor improvements have been made throughout the text.