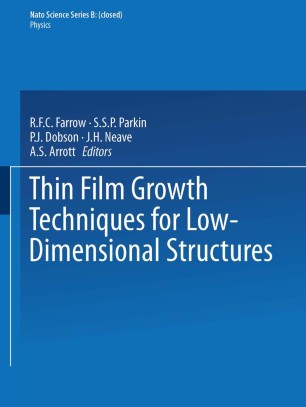 This work represents the account of a NATO Advanced Research Workshop on "Thin Film Growth Techniques for Low Dimensional Structures", held at the University of Sussex, Brighton, England from 15-19 Sept. 1986. The objective of the workshop was to review the problems of the growth and characterisation of thin semiconductor and metal layers. Recent advances in deposition techniques have made it possible to design new material which is based on ultra-thin layers and this is now posing challenges for scientists, technologists and engineers in the assessment and utilisation of such new material. Molecular beam epitaxy (MBE) has become well established as a method for growing thin single crystal layers of semiconductors. Until recently, MBE was confined to the growth of III-V compounds and alloys, but now it is being used for group IV semiconductors and II-VI compounds. Examples of such work are given in this volume. MBE has one major advantage over other crystal growth techniques in that the structure of the growing layer can be continuously monitored using reflection high energy electron diffraction (RHEED). This technique has offered a rare bonus in that the time dependent intensity variations of RHEED can be used to determine growth rates and alloy composition rather precisely. Indeed, a great deal of new information about the kinetics of crystal growth from the vapour phase is beginning to emerge.