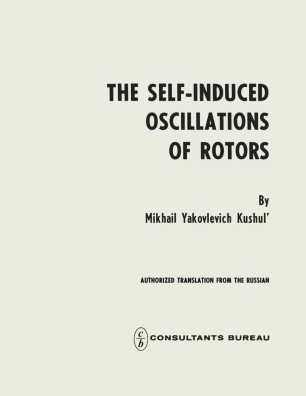 The rapid increase in operating speeds of mechanisms and machines during the last few decades has posed mechanical and technical engineers aseries of new problems. One of these is that of the investigation of the dynamics of flexible rotors operating at speeds greater than the first- and higher-order critical speeds. In con­ temporary machine design we must cope with various machines and assemblies containing shafts which operate under such conditions: turbogenerators. gas and steam turbines. spinning shafts. high-capacity pumps, and a multitude of special-purpose machines. One of the problems in the dynamics of flexible rotors-the passage through the resonance state-has re­ cently been almost completely solved in the work of Yu. A. Mitropol'skii. F. M. Dirnentberg, V. O. Kononenko. A. P. Fillippov. and others. Much less attention has been devoted to two other interrelated problems in the dynamics of high-speed rotors: the loss of stability in regime-combining forced vibrations due to imbalance in the supercritical region, along with self-induced or self-exc1ted vibrations. These problems are rapidly becoming more important as self-induced vibrations occurring at speeds beyond the critical speed are being met with more and more often in practice [1-3]. One of the main causes for the loss of stability of a rotor in the supercritical region. as was first estab­ lished by Kimball in [4] and Newkirk in [5] during the ninteen-twenties, is the force due to interna1 friction.