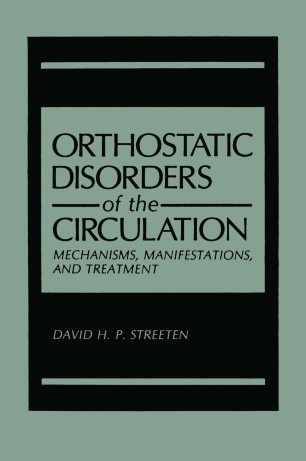 Orthostatic Disorders of the Circulation

Most of us spend at least two-thirds of our lives either sitting or standing. It is somewhat surprising, therefore, to find not a single book devoted to disorders caused by derangements of the normal physiological adjustments to changes in posture. In fact, until very recently, medical students have not even been advised to measure the blood pressure and heart rate in the upright posture as part of the routine physical examination. Although Bradbury and Eggleston first described orthostatic hypotension as a consequence of autonomic insufficiency in 1925, interest in orthostatic disorders has been slow to develop in the subsequent years. It is well known that the change from recumbency to the standing posture stimulates neurological, endocrine, and cardiovascular adjustments that ensure maintenance of a normal circulation despite the effects of gravitational forces. The mechanisms of these physiological responses to orthostasis have been stud­ ied by many investigators. Some of the defects to which antigravitational com­ pensatory mechanisms are subject, such as postural hypotension resulting from autonomic failure, have been studied intensively and have become part of the general knowledge of most medical practitioners. Other orthostatic disorders­ such as various other postural abnormalities of blood pressure control, and orthostatic edema-have received far less attention and have been unable to compete with the more dramatic and life-threatening ailments of humankind for a place in our standard medical texts. These disorders often give rise to distressing symptoms and may lead to severe impairment of health.