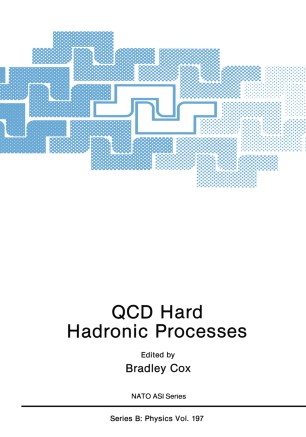 The Advanced Research Workshop on QeD Hard Hadronic Processes was held on 8-13 October 1987 at Hotel on the Cay, St. Croix, U. S. Virgin Islands. The underlying theme of the workshop, the first in a series, was an examination, both theoretical and experimental, of the state of understanding of Quantum Chromodynamics. Because of the pervasiveness of the strong interactions in all aspects of high energy physics, QCD is central to many problems in elementary particle physics. Therefore, this workshop was organized to provide a forum in which the theory Quantum Chromodynamics cou 1 d be confronted with experi ment. The workshop was organ i zed in four sessions, each of which concentrated on a major experimental arena in which a hard QCD process can be measured experimentally. A fifth session was rlevoted to global issues which effect all QCD processes. Each session began with a survey of the theoretical developments in the particular area and concluded with a round table which discussed the various information presented in the course of the discussions. A session of the workshop was devoted to the direct production of high transverse momentum photons in hadronic interactions. Data from several experiments, either completed or in progress at CERN (NA3, NA24, WA70, UA6, CCOR, R806, AFS, RllO, UA1 and UA2), were di scussed and the prospects for two new upcomi ng experi ments from Fermil ab (E-705, E-706) were presented.