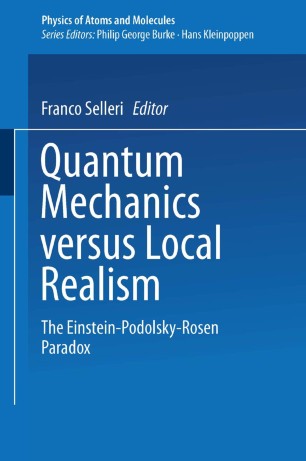 If you have two small objects, one here on Earth and the other on the planet Pluto, what would you say of the following statement: No modification of the properties of the object on the earth can take place as a consequence of an interaction of the distant object with a third body also located on Pluto? The opinion that the previous statement is correct is very natural, but modern quantum theory implies that it must be wrong in certain cases. Consider in fact two arbitrary objects separated by such a large distance that they are unable to exert any important mutual influence. It is possible to show rigorously that a measurable physical quantity exists, with a value more than 40% different from the value theoretically predicted by quantum mechanics. Necessarily then, either space is largely an illusion of our senses and it does not exist objectively, or information can be sent from the future to the past, or ... something important has to be changed in modern physics. This is the essence of the Einstein-Podolsky-Rosen (EPR) paradox. A paradox is an argument that derives absurd conclusions by valid deduction from acceptable premises. In the case of the EPR paradox the absurd conclusion is that Bell's observable d should have two different values d = 2.Ji and The "acceptable premises" are the following: 1. All the empirical predictions of the existing quantum theory are correct.