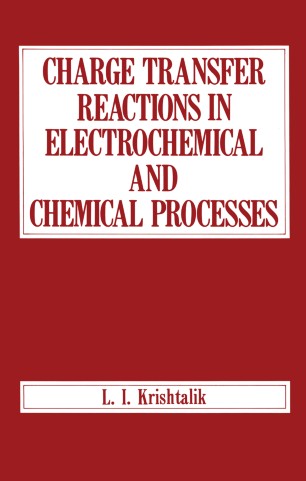 The mechanism of an elementary act is undoubtedly one of the most fundamental problems of chemical and, in particular, electro­ chemical kinetics. Although this problem has fascinated scientists for quite a long time, it was only in the late fifties and early sixties that it began to be actively investigated for charge transfer reactions. Owing to the development of new methods in the analysis of this problem, significant advancements were made in theoretical as well as experimental studies. These investigations showed that the physical mechanism of charge transfer in all processes including heterogeneous electrochemical and homogeneous chemical and bio­ chemical processes is basically the same. Hence, the results ob­ tained in the field of electrochemical kinetics are relevant to the understanding of homogeneous chemical reactions as well. This book endeavors to summarize the results of investigations carried out during the last two decades. It is based on the author's monograph "Electrode Reactions: The Mechanism of an Elementary Act" (Nauka, 1979). As compared to the first version, the book has been considerably revised and enlarged not only to include a large body of data published between 1978 and 1982, but also to analyze in detail the links between electrochemical and homogeneous, in particular enzymatic, kinetics. As a result, a new chapter has been added to the book. The change in the title reflects the fact that the material contained in the book is not restricted to an investigation of purely electrochemical problems.