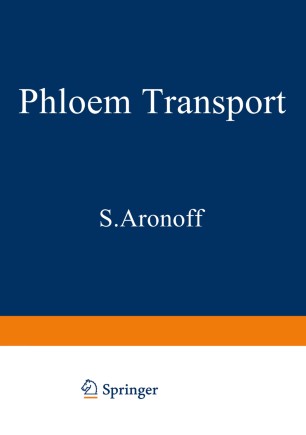 Ten years ago, at the International Botanical Congress in Edinburgh, a group of us from various countries discussed the difficulty of pursuing academic problems in depth at such meetings. In particular, we were discouraged at the poverty of time for phloem transport. From long association, we were conscious of the extraordinary breadth of the problem, from developmental through anatomical, to biophysical and physiological. Only by a reasonable understanding of all these components could one hope to come to some kind of understanding. We decided to establish common plant material so that data would have a common source. Similarly, we resolved to exchange information by circulating pre-publication manuscripts. For awhile, after the meeting was a pleasant memory, the plan seemed to be working; but, as is so often the case, human infirmities and foibles played early and, subsequently, predominant roles. Some became administrators (a punishment for good behaviour); others concentrated on alternative rings in their academic circuses. The next Congress (in Seattle) proved similar to its predecessor in its neglect and, consequently, succor was sought elsewhere. A little known, but remarkably understanding group becoming visible was the Science Committee and the Division of Scientific Affairs of N. A. T. O. Its sponsorship of Advanced Study Institutes including phytochemistry and phytophysics, was unusual both in the generosity of its funding and in the requirements for academic quality.