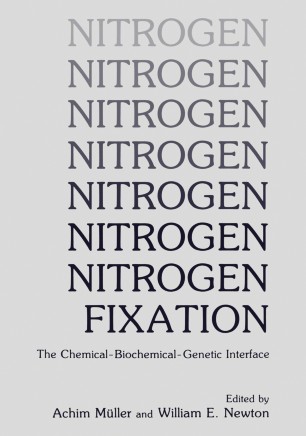 This volume constitutes the proceedings of an international meeting held from June 28 to July 1, 1981, at Zif, Zentrum far Interdisziplin~re Forschung an der Universit~t Bielefeld, West Germany. The meeting was one of a continuing series organized through Zif on topics which transcend the boundaries of the traditional academic disciplines. The almost exponentially growing area of nitrogen fixation research fits this criterion completely. It is, however, so broad that we oriented and focused the meeting on just the chemical, biochemical, and genetic aspects to maximize the interaction among the participants and to produce a volume which would serve as a reference source for the involved researcher, the newly interested scientist and those with a more casual interest. The meeting was generously supported by Zif, the Westf~lisch­ Lippische Universit~tsgesellschaft, and the Fonds der Chemischen Industrie. We sincerely thank these organizations for their generosity and interest and for recognizing the importance of nitrogen fixation research for the future of mankind.