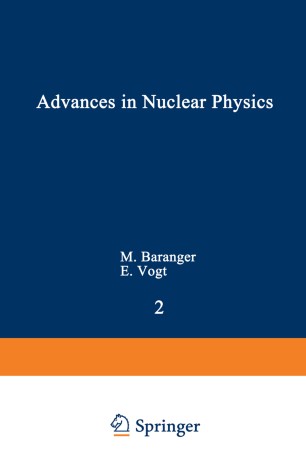 The aim of Advances in Nuclear Physics is to provide review papers which chart the field of nuclear physics with some regularity and completeness. We define the field of nuclear physics as that which deals with the structure and behavior of atomic nuclei. Although many good books and reviews on nuclear physics are available, none attempts to provide a coverage which is at the same time continuing and reasonably complete. Many people have felt the need for a new series to fill this gap and this is the ambition of Advances in Nuclear Physics. The articles will be aimed at a wide audience, from research students to active research workers. The selection of topics and their treatment will be varied but the basic viewpoint will be pedagogical. In the past two decades the field of nuclear physics has achieved its own identity, occupying a central position between elementary particle physics on one side and atomic and solid state physics on the other. Nuclear physics is remarkable both by its unity, which it derives from its concise boundaries, and by its amazing diversity, which stems from the multiplicity of experimental approaches and from the complexity of the nucleon-nucleon force. Physicists specializing in one aspect of this strongly unified, yet very complex, field find it imperative to stay well-informed of the other aspects. This provides a strong motivation for a comprehensive series of reviews.