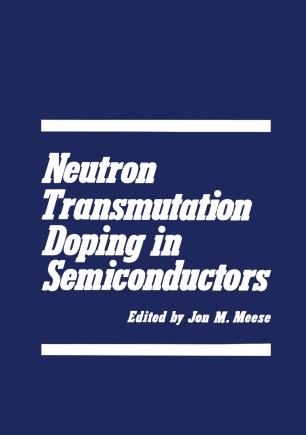 This volume contains the invited and contributed papers presented at the Second International Conference on Neutron Transmutation Doping in Semiconductors held April 23-26, 1978 at the University of Missouri-Columbia. The first "testing of the waters" symposium on this subject was organized by John Cleland and Dick Wood of the Solid-State Division of Oak Ridge National Laboratory in April of 1976, just one year after NTD-silicon appeared on the marketplace. Since this first meeting, NTD-silicon has become established as the starting material for the power device industry and reactor irradiations are now measured in tens of tons of material per annum making NTD processing the largest radiation effects technology in the semiconductor industry. Since the first conference at Oak Ridge, new applications and irradiation techniques have developed. Interest in a second con­ ference and in publishing the proceedings has been extremely high. The second conference at the University of Missouri was attended by 114 persons. Approximately 20% of the attendees came from countries outside the U.S.A. making the conference truly interna­ tional in scope.