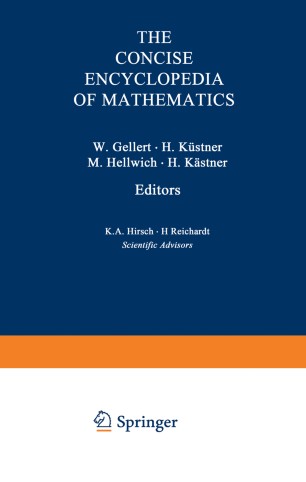 The VNR Concise Encyclopedia of Mathematics

It is commonplace that in our time science and technology cannot be mastered without the tools of mathematics; but the same applies to an ever growing extent to many domains of everyday life, not least owing to the spread of cybernetic methods and arguments. As a consequence, there is a wide demand for a survey of the results of mathematics, for an unconventional approach that would also make it possible to fill gaps in one's knowledge. We do not think that a mere juxtaposition of theorems or a collection of formulae would be suitable for this purpose, because this would over­ emphasize the symbolic language of signs and letters rather than the mathematical idea, the only thing that really matters. Our task was to describe mathematical interrelations as briefly and precisely as possible. In view of the overwhelming amount of material it goes without saying that we did not just compile details from the numerous text-books for individual branches: what we were aiming at is to smooth out the access to the specialist literature for as many readers as possible. Since well over 700000 copies of the German edition of this book have been sold, we hope to have achieved our difficult goal. Colours are used extensively to help the reader. Important definitions and groups of formulae are on a yellow background, examples on blue, and theorems on red.