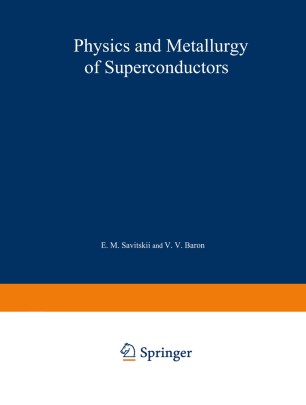 Proceedings of the Second and Third Conferences on Metallurgy, Physical Chemistry, and Metal Physics of Superconductors held at Moscow in May 1965 and May 1966

The papers collected in this book were presented to the second and third annual confer­ ences on the metallography, physical chemistry, and physics of superconductors which took place in May of 1965 and 1966. These annual conferences, held at the A. A. Baikov Institute of Metallurgy of the Academy of Sciences of the USSR, have quickly become part of the scientific life of the country, and are already a tradition. More than thirty papers were read at each con­ ference, and between 250 and 300 representatives of a large number of organizations were pre­ sent at each conference. There was a distinguished array of scientific organizations taking part in the work of these conferences, which discussed current problems in the structure (constitution) and pro­ perties of superconductors, and ways of improving their characteristics so as to ensure the successful use of these materials in various new fields of technology. In the period which has passed since the first conference (May 1964), scientific research into superconducting systems and compounds has undergone substantial further development. A number of diagrams relating the composition to the superconducting properties have been studiedj new superconducting alloys have been developed together with methods of processing them and making them into various objects. The phase diagrams of the most promising super­ conducting systems (Nb-Sn, V-Ga, Nb-Zr, and Nb-Ti) have been investigated moreprecisely.