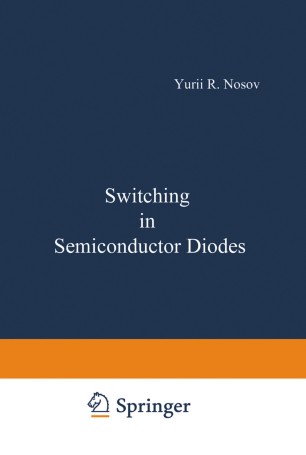 It gives me great pleasure to learn that this book, whose ori­ gin owes much to the work of American scientists and engineers on semiconductor technology, will reach American and other English­ speaking readers. I am grateful to Plenum Publishing Corporation for arranging the American edition of this book and to Mr. Albin Tybulewicz for his translation, September 5, 1968 Yu. R. Nosov v Preface to the Russian Edition One of the most important applications of semiconductor diodes is their use in electronic pulse circuits. The response of these diodes under switching conditions is governed by the phenomena of accumulation and dispersal of non­ equlibrium carriers, which are also observed in other p-n junction devices. It was found in the late 1940's that when point-contact ger­ manium diodes were used in circuits through which short (several tenths of a microsecond) electrical pulses were being passed, the 1 effective reverse resistance of these diodes decreased considerably below the static value. Further studies showed that when a diode was switched rapidly from the forward to the reverse direction, an anomalously large reverse current flowed for some time. In view of the importance of this phenomenon in the efforts to reduce the response time of pulse circuits, many investigations of the phenomenon were carried out and these investigations pro­ vided the basis of a theory of transient processes in semiconductor diodes.